On our way south we  spent a few days in Ergny in north west France (Nord Pas de Calais). Our time in this part of France somewhat unintentionally focused on the battles of WWI and II.

We had seen quite a bit of this history in England through the museums in London (notably the Churchill War Rooms and Museum) and through visits to areas such as Dover Castle, from where the evacuation of Dunkirk was directed during WWI.  However, the stark reality of the batlefields and the extent of the destruction was most forcibly brought home to us as we drove  through numerous sleepy French villages each with their own story to tell.

In Arras, a lovely little town with a beautiful town square and Town Hall, we visited the Carriere Wellington museum where the tunnels dug by the New Zealand engineers can be toured. Here the story of the WWI Battle of Arras is told with some emotion as you walk in the tunnels where the troops were quartered and sent to battle. 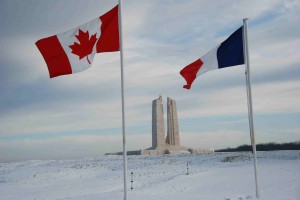 Near Vimy we stopped at the memorial to the Canadians troops before wandering around part of the vast network of trenches on Vimy Ridge occupied by them during the Arras battle. 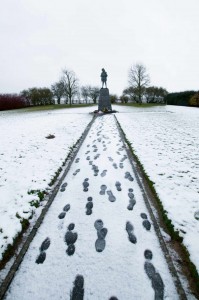 At Bullecourt, along the front line of the battle we visited the memorial to the Australian troops. Looking at the battle lines it was apparent that our troops occupied a fairly forward and isolated position. Not surprisingly their loss of life was exceptionally heavy.

A stop along the coast just south of Calais, with a view across to the White Cliffs brought home just how close the various battles came to British soil.

For me though, by far the biggest impact was the constant presence of large numbers of allied war graves littering every part of the countryside.