After several weeks travelling down eastern Spain we elected to spend some time in Morocco instead of immediately travelling north. As often happens, despite thinking we had done the research and were prepared our arrival in Morocco had a few hiccups. Firstly when we arrived off the ferry we were waved through by the officials until, just as we were about to leave the port area we realised that we had not purchased the necessary car insurance. 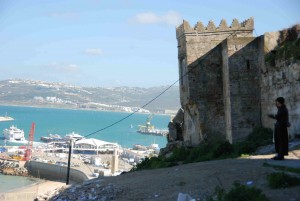 Doing so became a bit of a confusing nightmare of visiting and revisiting in turn several officials across the port area who appeared to not fully understand either what we wanted or what they were there to do – as we were to discover not unusual for Morocco’s bureaucracy. We thought we were going to fail at the last hurdle but we eventually got our insurance and headed out of the port area for our next surprise. We had not landed in Tangier as expected but were actually in Tangier Med, a port area several tens of kilometres up the coast.  Still it was an interesting drive in and our introduction to stopping (many times) at inner city round-abouts to allow sheep and goats to be herded through.

During our month in Morocco we visited the cities of Tangier, Rabat, Casablanca, Marrakesh, Meknes and Fez as well as several small towns. Generally, we felt that after having seen one city there was not an astounding amount of difference between the others. The medinas and souks, while interesting, were largely the same from one place to another – mazes where one could easily become lost but with similar merchandise and the ever present touts . The most interesting for us was Marrakesh, as a more dynamic and modern city and the real disappointment, Casablanca, a squalid and dirty city with not much to interest at all other than the Hassan II mosque on the water. Hardly the romantic ideal of the movie.

The small towns on the other hand held much more interest. These had life and character that were sadly missing in the larger cities. Our favourites were Essaouira, a small fishing town on the western coast as well as Ouarzazate and it’s surrounds. Both were friendly welcoming towns with less of the constant touting that nearly drove us to distraction in the larger, more commercial areas. Our stops in these smaller towns were a very welcome interlude to the hustle associated with the city areas.

There were several constants that made relaxed travelling for us difficult in most areas. While the locals all appeared friendly to begin with it was made very obvious early on that the welcomes and offers of help all had pecuniary interests attached – quite aggressively at times. This attitude extended down to the smallest child – nothing for free. I took to carrying sweets to hand out rather than giving money to the children as this more often than not was not retained by the children. 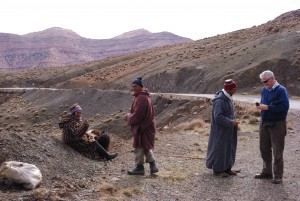 having photos taken either for free (you can take my photo but you have to pay) or altogether. Meaning that in any public place you were often abused for pointing a camera even if only taking general scenery shots. At one attraction I was abused by the public guards for being insolent enough to point a camera in their direction. – not that I argued as they had big long sharp pointy things. I eventually became very secretive when taking photos and it took a lot of the enjoyment out of it.

On top of this, at the entrance and exit to each built up area (and often while driving through) there was a constant police presence. We were stopped several times, most likely because we were driving a GB plated right hand drive vehicle. Initially this was a bit of a novelty but the constant pulling over and answering what were largely stupid questions or being told we had broken some law that the locals were all obviously not observing became a bit wearing. At one of these stops we were told we had been speeding (not obviously true as we were slower than the prevailing traffic) and would need to pay some very large fine. Eventually we convinced the officer we actually had no money on us to pay (luckily) and he let us go with a severe warning.

After a month of various adventures including, camel trekking in the desert and 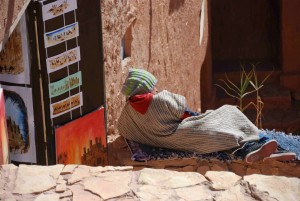 exploring the ancient Roman ruins of Volubilis, we took away some wonderful memories of Morocco. Thankfully the good memories will largely override those of the constant hustle, the instant unfriendliness of the touts when they realised they weren’t getting handouts and the aggressive  attitudes to photos. 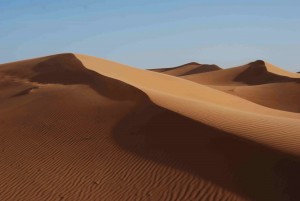 One of the things we wanted to do while in Morocco was to really see the desert. After some consideration we elected to do a camel trek out of Merzouga with a locally based company, Merzouga Excursions.

We wanted to go by camel, as four wheel driving didn’t seem at all appropriate – camels are after all evolved for the desert and do minimal damage to the dunes. We also wanted a more traditional camp rather than a sterile air-conditioned tent and Merzouga Excursions offered this for a very reasonable price.

Once in Mezouga, south of Errachidia, we were met by our tour guide  Hassan, who introduced us to our camel leader, Ali Baba, and our trusty steeds, Bob Marley and Jimi Hendrix.  The entire setup was small but very professionally run. We set off around 3.30 with Ali leading the way on foot. Apparently you need to actually lead the camels as it is the only way they will  go where you want.

We spent an amazing hour and a half slowly making our way through the rolling dunes taking in the wild beauty of the area and desperately trying to capture some of it in photos. We eventually arrived at the traditional bedouin campsite in time to rest our tender nether-regions and to take even more photos as the sun descended. 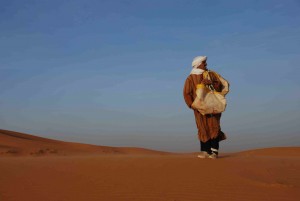 Ali, our guide, transformed himself into Ali, our chef, and we dined on traditional bedouin food sitting around the campfire under a ceiling of brilliant stars.

In the morning we rose early to watch the sun come up over the dunes, a truly magical sight watching the changing colours on the gently rippling sands.

Then it was time to contemplate the necessity of mounting and sitting on those *!*#&*! uncomfortable camels for another hour and a half. We fleetingly contemplated walking back but eventually summoned the courage and mounted up.

The ride back through the dunes with the sun slowly rising and the colours changing around us luckily took our minds (largely) off our backsides. For several weeks however we bore the scars and it was some time before I could sit comfortably and without thinking horrible thoughts about our camel friends. 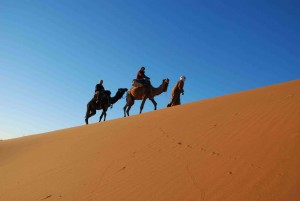 It was a truly wonderful experience, made more so by our guides, and one I would not have missed.  However, if I never get anywhere near a camel again it will be way too soon.