The city of Bordeaux is not just the capital of a major French wine region, it is a city of World Heritage areas and buildings and has an enormous character. 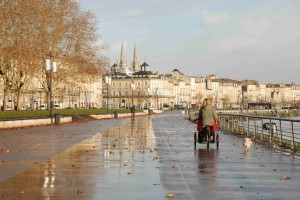 Bordeaux’s city architecture has been largely unchanged for some time and has recently undergone a restoration and refurbishment project, which provided a vibrant area along the quays of the Garonne River. A walk along the riverfront is not to be missed with the classical architecture shown to advantage by innovations such as a specially designed fountain adjacent to the Place de la Bourse, which provides photographers with  a mirror reflection of the buildings in the resulting pool. 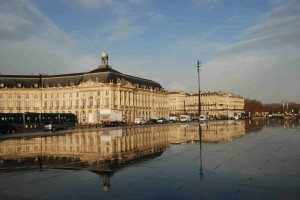 Along the river bank we also saw several Ragondins (a large water mammal related to the beaver) and some small water rats. The Ragondins in particular were unfazed by the proximity of the pedestrians and came quite close to the boardwalk for the scraps fed to them by the locals.

Like many French cities, Bordeaux has several very large churches all of which are interesting in their own way – although sometimes the smaller (non-heritage) churches prove to be the most interesting.

Bordeaux also has several areas of open markets and many kilometres of pedestrian only shopping areas. One of these streets, the Rue Saint-Catherine, which starts at the Place de la Victoire and ends near the Grand Theatre, is one of the longest shopping malls in Europe. 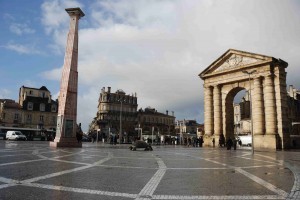 There are also numerous cafes, restaurants and squares to relax and enjoy the local produce. All in all the city that has a lot to offer.