Having spent a bit of time wandering around art galleries in Australia (and other parts of the world), particularly when the masters come to town, it was nice to finally get into the galleries in Paris to see some of the artworks there. My emotions on seeing  these various masterpieces was interesting but not entirely unexpected.

In the Louvre we headed first for the Mona Lisa (just because we were in early and wanted to avoid the crowds) and then the Venus de Milo. Most people have seen images of the Mona Lisa since early childhood and for me these have never seemed anything special. I have also been told that the painting itself is not big so I didn’t expect to see a large painting but did expect the reality would be different from the various images I had seen. I have to say though the reality didn’t startle me with any other emotions than “okay, so that’s the Mona Lisa”. 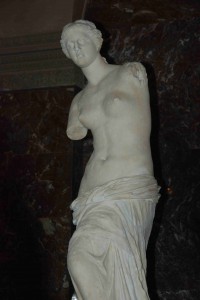 The Venus didn’t do much more for me – while it was a bit more interesting, as it is three dimensional and therefore had aspects to explore that are hard to reproduce in a flat image, I found it hard to differentiate it from many other very good sculptures. Like the Mona Lisa, I found it difficult to discern any qualities that make these artworks different from the many other very good paintings/sculptures on display in the various  galleries of the world.

However, our visits to the Musee Rodin, the Musee de l’Orangerie and the Musee d’Orsay evoked quite different emotions. These museums are much smaller than a lot of the other museums that house some of the great artworks and as such are easy to manage in a single day. They also provide a much more personal viewing and appreciation of the artwork.

Rodin’s work is fascinating and the intimate environment just highlighted the talent behind the work. In the Musee de l’Orangerie we sat in large tranquil oval rooms surrounded by expansive panels of Monet’s waterlilies – quite special. 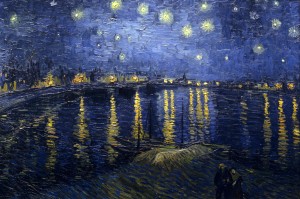 My special moment came in the Musee d’Orsay on our second visit when we wandered up to the second level to the impressionists. Here for the first time I came face to face with Van Gogh’s “Starry Night”. While, like the Mona Lisa and Venus de Milo, I have seen images of the art many times, in my mind the reproductions can’t do the reality any justice. Like most of Van Gogh’s work the textures and colours are hard to reproduce in a flat image and I found it hard to pull myself away.

For me the Mona Lisa is relatively flat and colourless – I much prefer the colour, texture and vibrancy of Starry Night but, to each their own.