My first real experience of Spain, as with most things in life, wasn’t quite what I expected.

Travelling from France into Spain I immediately saw a difference in the road systems. Spain has very good multi-lane roads and highways with generally good wide roads. The exception of course are the older parts of the city areas, which can be extremely narrow and difficult to navigate.

We had heard horrors of the driving in Spain but in general we found the drivers very patient both with the intricacies of the traffic and the fairly tentative English drivers (us). Although they do seem to have a blatant disregard for traffic lights (red only means stop if there is nothing obvious in your way – and no police around) and other road rules, they seem to do this in a non-aggressive and strangely safe way (most of the time).  We certainly had no major concerns from other drivers during our driving travels through Spain.

Generally we found the towns and cities clean and very people friendly. The exceptions seem to be the prevailing smells of sewer around the manhole covers in a few of the larger cities (a bit off-putting in eating areas) and the seeming unwillingness to clean up after the many dogs (particularly in Barcelona and Valencia).  In many parts of Spain there was also significant evidence of the recession, such as derelict developments, that detracts somewhat from the overall picture of a clean and well-managed environment.

Beggars, of which there are many in Spain, seem to be tolerated in ways they never would be in many countries. The numbers of beggars seem to reflect the general recession of the country. Seemingly, consequently, they are largely ignored by the local population who seem to be inured to the constant appeals on their purses.  This extends to cafes and bars were beggars and sellers of goods can wander freely through the diners soliciting handouts.

The biggest negative I found  was the very officious and apparently inefficient Spanish police. In Barcelona we watched the constabulary single out, for no apparent reason, a pair of very good Spanish flamenco guitarists that we had been enjoying,. The police stopped them playing to the tourists and not only moved them on they took their money, property and equipment despite strong sentiment in favour of the busking by a large crowd.  We saw similar targeting of buskers in several places – I’m not sure if the local jurisdictions realise that these buskers are generally good value for tourists (with the obvious exception of the piano accordionist). 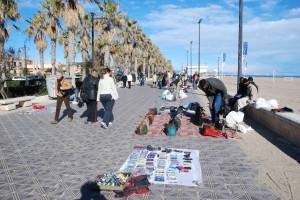 In Barcelona and Valencia we watched some very inefficient “sting” operations that targeted the illegal fake handbag and sunglass sellers – the police were no match for the (usually) African natives, who could pack up and move on in the blink of an eye.  Strangely the police there don’t seem to understand the concept of an undercover or plain-clothes operation – any wonder the scammers have time to get away when the police come in sirens blazing, in full uniform. 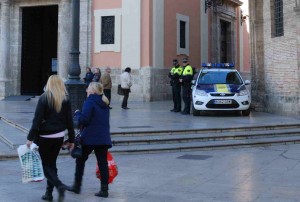 I generally have a lot of time for the police – they have a tough job.  However, I have seen no evidence of this in Spain – they seem to stand around a lot in an attempt to intimidate the local population into submission. The disappointing thing is that while they are standing in one spot the illegal activity continues in another – very sad.

However, these are really minor irritations in a country that has a lot to offer, particularly for wandering travellers. 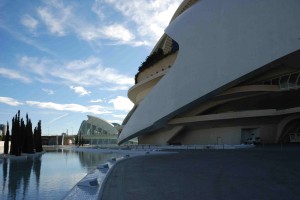 Our second stop in Spain was the city of Valencia – home to the last two America’s Cups, Moto GP and Formula 1 racing.  The city has some odd dichotomies – in the very new, grand areas around the port and science park, which contrasted with some very depressed and fairly squalid areas adjacent to these shiny new areas. 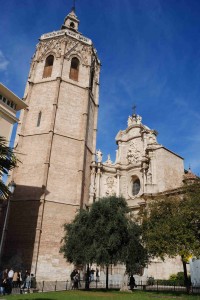 None-the-less, Valencia has a lot to offer. There are several grand churches and cathedrals to be visited in the historic centre of town. The plazas here also offer a relaxed environment to sit, eat and enjoy the culture.  We found some wonderful tapas cafes that provided a good and varied meal without huge expense.

In the historic area there is a large central market, which is interesting both for the variety of food on display as for the building the markets are housed in. Nearby is the old silk exchange, which has some interesting gargoyles and the very ornate ceramics museum that can be visited by prior arrangement. 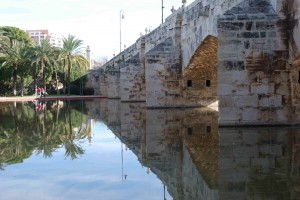 In the centre of the city is the river park, which runs for 9 kilometres and provides the focus of many community activities in the city. The park sits in the bed of the old river, which was diverted many years ago because of its high pollution. The city council wanted to turn the bed into a roadway but the residents objected and insisted the strip be turned into a community park and sporting facilities – how right they were.

The river park brings the two sides of the city together rather than dividing it as a road would have done. The park (and the city itself) is a very pleasant and interesting place to walk despite the obvious neglect in some areas. 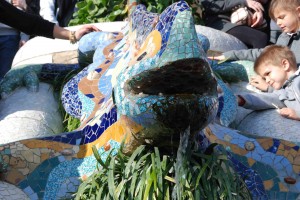 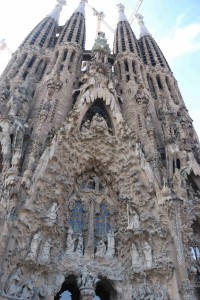