After picking up our new car we have now left London, our home of the last few months behind, and headed for Maidstone in south-west England.

Today we headed into the surrounding country and visited two very different castles not very far out of Maidstone, Leeds and Bodiam. Both castles are surrounded by moats and are extremely picturesque, “fairytale” castles. 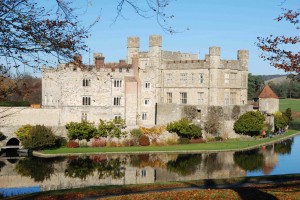 We spent the morning at Leeds Castle, supposedly “the most lovely castle in the world”. The largely intact castle was built in the early twelfth century and has been owned by six Queens of England before it finally passed to private hands after the time of Henry VIII. The castle has seen several major additions and renovations over the years and in 1975 the estate was left to the Leeds Castle Foundation who preserve the Castle and grounds for the public to enjoy (at a cost).

Wandering through the large castle and seeing numerous rooms decorated in various styles from (reconstructed) mediaeval to relatively modern is fascinating. However, I found it hard to always reconcile the old with the new, such as identifying the rooms of Catherine of Aragon’s when decorated  in the style of the last owner, Lady Baillie.

Bodiam Castle, in contrast, is largely just a shell but in my mind this doesn’t detract in 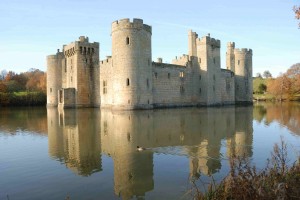 any way from the romance of the castle or its setting. Bodiam was built in the 14th century by Sir Edward Dalyngrigge to defend against the “French invasion”. The castle fell into disrepair in the 17th century after the then owner of the castle,who supported the royalists in the English civil war, sold it to pay his fines when the Parliamentarians won. There has been some restoration work on the castle but it seems to generally have been to make the walls sound and the area safe for tourists.

From the outside the castle almost looks complete but on the inside it is very clearly a wreck. Despite this (or because of this), Bodiam is still a very interesting and romantic castle. I found it much more fascinating than the intact Leeds Castle because I had no modern decor to disrupt my imaginings of what the castle was when it was in its prime.

While I loved both castles Bodiam is very much my favourite.